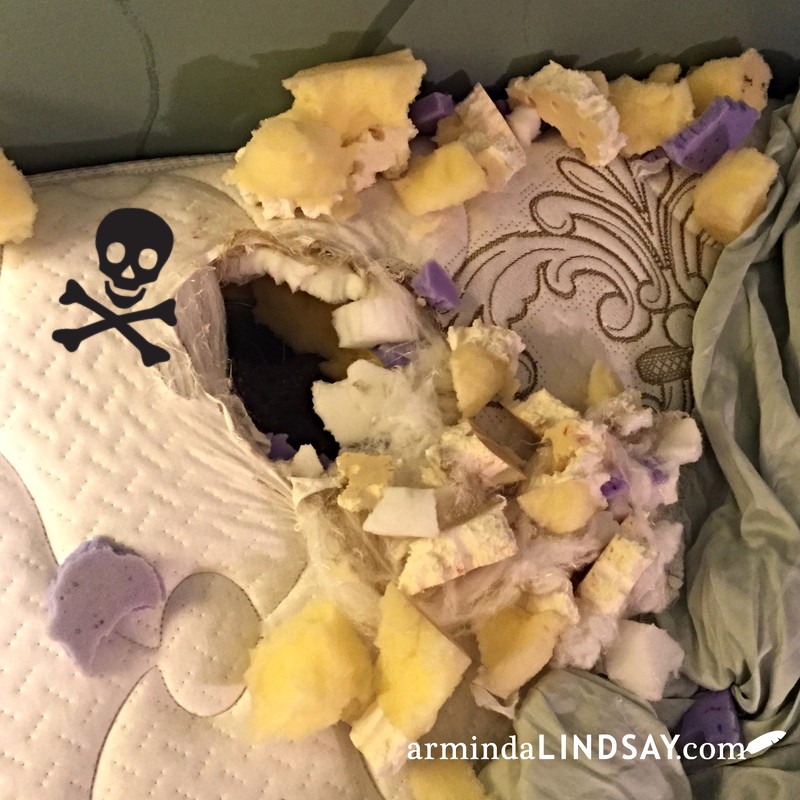 Once upon a time I bought a brand new mattress. And just a few short months later I came home to discover my neurotic, anxiety-ridden, beloved dog Eli had artistically rearranged my mattress and created a hiding hole for me to use inside of that brand new mattress, which hole would be especially handy should I decide to become a pirate.

Did I get upset? For a moment, yes, before I considered why Eli might have gifted me with his reimagined version of what a mattress could look like or do for me.

Since I had no immediate plans for piracy, I set about re-stuffing the mattress and as it turns out, every bit of fluff that came out of the mattress fit right back in again and a little bit of duct tape over the opening held it all in place.

Have you ever had a catastrophe strike? At work? Or home? Or personally? Not likely. You only think you’ve had catastrophes. My mattress makeover was never a catastrophe, except in my mind. My upset was a reaction to a belief I made up in my own head.

Upset is a choice, not a consequence.

Yes, I could be angry at Eli, but what would that prove or fix? The mattress wasn’t ruined, just redesigned. Was it useable? Completely. The best course of action for me to take in my estimation was to connect better with Eli; to understand why he’d dug the hole so I could then support and love him beyond the fear that caused the behavior in the first place.

I like to remind myself that nothing outside of me causes my upsets. And when I find myself in an upset, the best course of action for me to take is to connect better with myself, to understand the internal hole I’m standing in so I can support and love myself beyond the fear that caused the triggering event in the first place.

Don’t throw out the mattress; it’s 100% useable. That hole is not a catastrophe. Your upset is not the end of the world, nor is your upset anyone’s “fault.” Unless you have plans to stash buried treasure and strike out as a pirate, quietly, slowly and intentionally put your fluff back and get some duct tape to hold it in place.

And if you find yourself in an upset more often than you care to admit, and before you blame the dog, may I encourage you to quietly, slowly and intentionally put your arms around yourself and give a squeeze. Remind You that everything is okay and whatever holes feel empty inside of you are fillable; your fluff might be a bit scattered, but it isn’t lost. 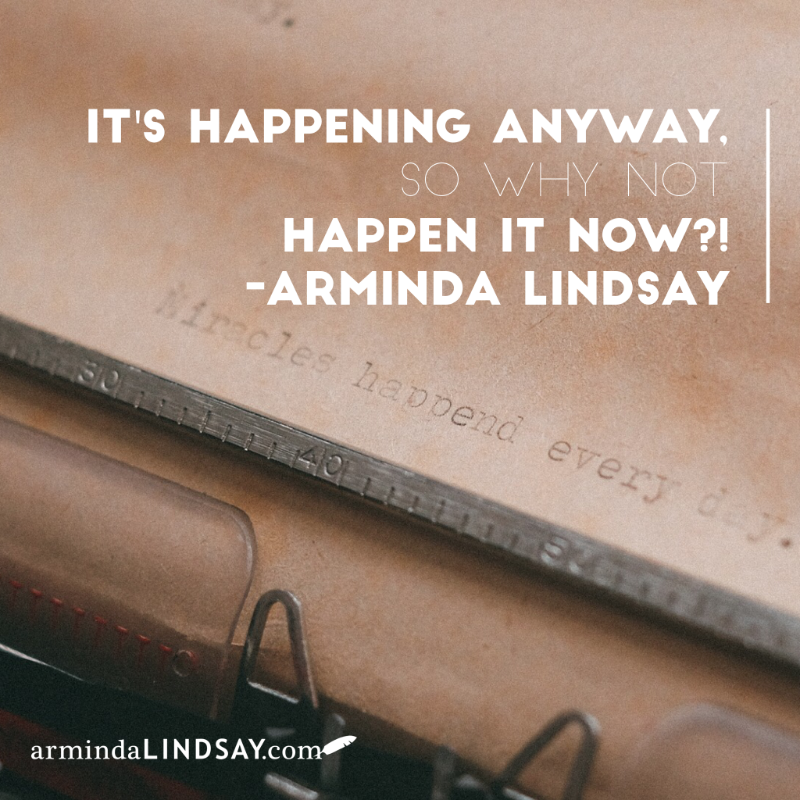 During a recent conversation with my friend and colleague, Melissa Ford, we were discussing the inevitable changes that come with life. In my case, my daughter is graduating from high school this week and in August will be moving to another city to begin university. This life change brings with it many emotions and opportunities for personal growth and expansion.

My family includes myself, my (about to leave home for university) daughter, and our dog Eli. As we have been confronting these changes and watching copious amounts of the Gilmore Girls (but please no spoilers, we haven’t completed the original series yet), we are experiencing a range of emotions that run the gamut of excited and thrilled for what’s next to freaking out that it’s happening so fast and life is going to be so different and scary because of all the unknowns.

For years I’ve been saying that when my daughter leaves for school my plan was to pack up and move myself somewhere else. Destination TBD.

Two days ago during a friendly conversation with a friend, I casually mentioned my intention to move later this year. When asked my timeline and whether I intended to sell my place, I gave my typical responses: Sometime after September and undecided.

“Well if you’re going to sell, summertime is probably the time to sell,” was all she said.

What a revelation. My denial tactics had abruptly come to an end. This was all happening whether I admitted it or not. My daughter is actually graduating high school. On Thursday! And she is, in fact, moving to another city that I will have to reach by plane when I want to see her. In August!

I really challenged myself — was I “all in” with my decision to make some changes in my own life, or have I just been saying that to avoid deciding what’s next for me? If I’m all in, as my friend and colleague Chris Dorris reminds us (reply to this email if you’d like his audio program on commitment), the next steps become apparent as you take them. You don’t need to think about it; you just do.

When I slowed myself down long enough to question my position, my mindset, I knew my truth: I’m all in. I am decided. I made a commitment to ME.

So if you’re in the neighborhood or know someone interested in a lovely well-kept home, mine’s officially on the market.

Here’s to summertime and saying yes.

Because if it’s happening anyway, why wait? Jump in. Happen it now and create the adventure as you go. 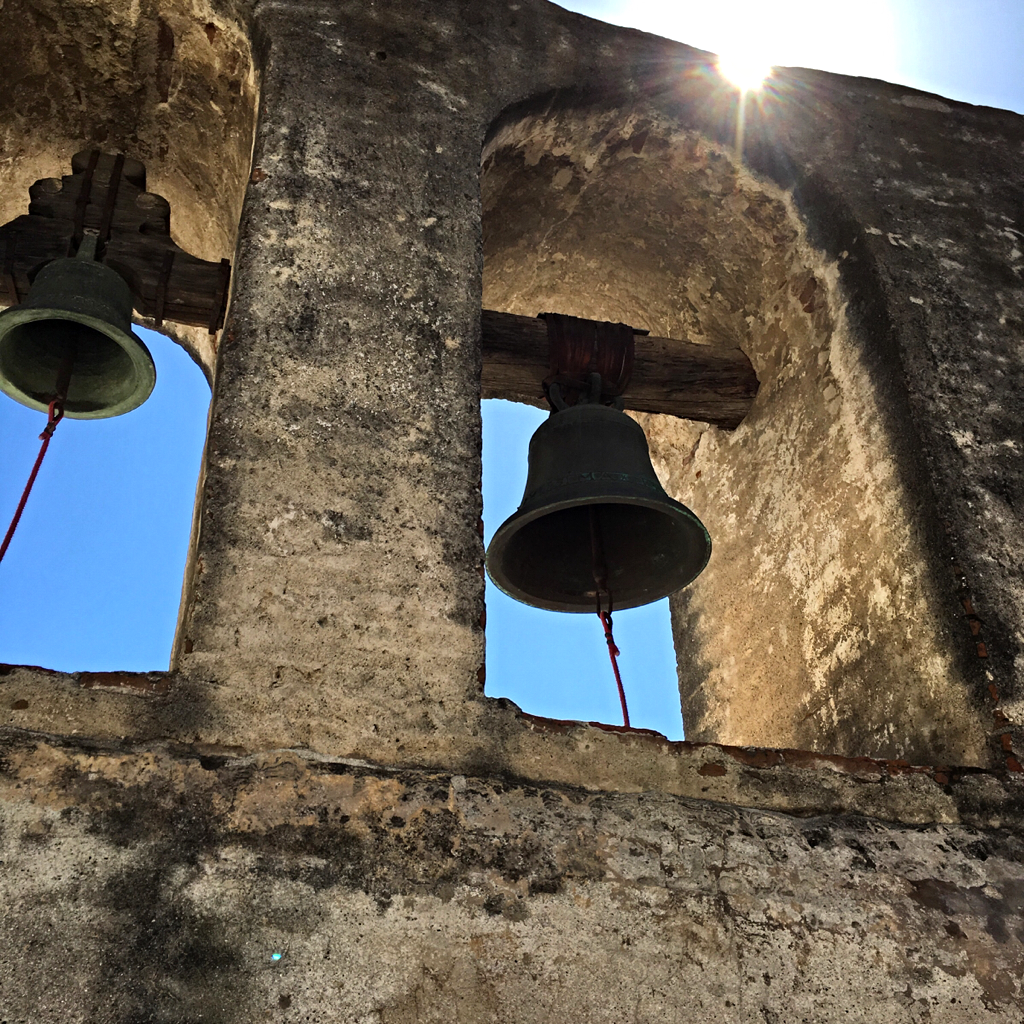