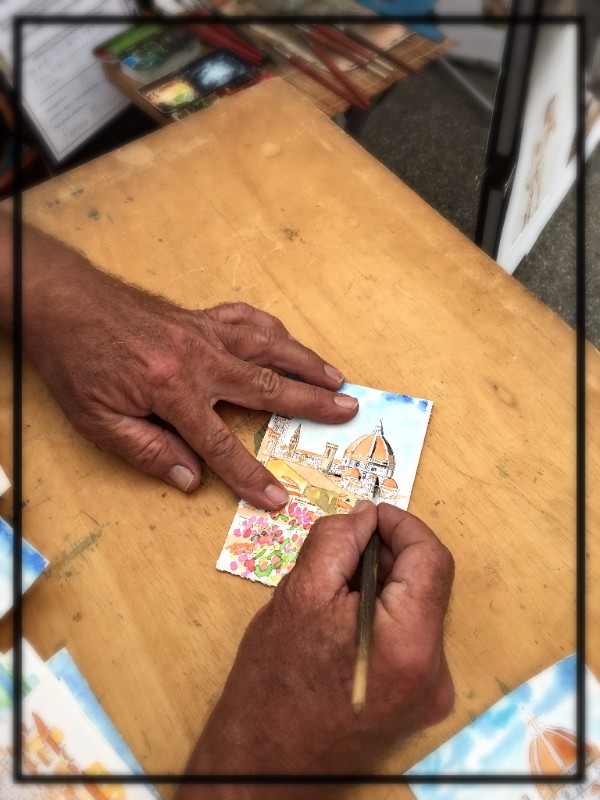 Throughout Italy we encountered artists everywhere: on sidewalks, in city squares, and outside of famous landmarks. They had lots of their pieces displayed, allowing their work to speak for itself while they continued creating, seemingly oblivious to passersby. Following a particularly strenuous climb to Piazza Michelangelo, which boasts panoramic views of the city and a bronze replica of Michelangelo’s David, my daughter and I walked to the farthest reach of the square, noticing only the gorgeous views provided of the city of Florence stretching out as far as we could see in front of, and below, us. It wasn’t until we turned around to contemplate David that we noticed the piazza was teeming with artists and vendors of every kind.

My attention was drawn to one particular artist’s work and I began searching his paintings for the one that might speak to me. Intent to create a customer, the artist started recommending watercolors I had yet to see and still nothing was the right one. As if on cue, the artist turned to a folder he kept at his seat and opened it for my benefit. Inside were two or three dozen more watercolors, each spectacular. It was inside that folder I found the watercolor I’d been seeking and when I told him I’d take it, the artist immediately dropped to his knees and began adding to the piece.

I was shocked and delighted. I thought it was perfect when I found it in that folder, but to the artist, the piece was not yet complete, and I watched him lovingly put the finishing touches on his work, his painting, his creation, before gently turning it over to my care.

We are each of us responsible for our own creation. The creation of you. And only you — through your artist’s eyes — can see where and when some additional work might need to be done. No one else gets to decide that. Others might make suggestions or provide feedback (sometimes requested and oftentimes not) but only you can see what you’re creating and what your ending might look like.

A word of caution: don’t be so caught up in the long-term view you neglect turning around to see what’s right in front of you. And just like my artist friend in Piazza Michelangelo knew his creation needed some additional shading and highlighting, you, too, might see some corners that could use some softening and some talents that desire to shine.

Art is about rearranging us, creating surprising juxtapositions, emotional openings, startling presences, flight paths to the eternal. –Rosamund & Benjamin Zander, from The Art of Possibility

You are a magnificent work of art. Display yourself. Pay no attention to the passersby. Keep creating.